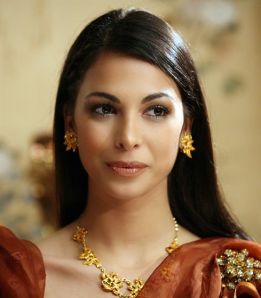 DR. TALETTA (LOTTIE) MORGAN
For the longest time I had a hard time visualizing Lottie in my head, until I saw this actress on a TV show. That’s when I knew I found her.
Born: December 12
5′ 8″
Occupation: Psychologist
Favorite color: Yellow
Favorite band: Lifehouse; Plain White Ts; Colbie Caillat
Favorite food: Anything David cooks
Unique physical attribute: Small dimple on chin; heart-shaped birthmark on left shoulder
Drives: White Jeep Wrangler
Pet peeve: “David’s occasional bossiness. If anything will raise my hackles, that’s it.”
In her spare time she likes to: Play volleyball or go to the beach with David and get naked
Most embarrassing moment: “Do I really have to tell you this?” She waits for my nod. “Okay, then, I guess there’s no way around it. My best friend, Lori, and I went to a bachelorette party a while back. There about thirty of us, and around three in the morning we wound up at a mid-town New York nightclub after a long pub crawl. I don’t remember how it happened exactly, but Lori and I ended up dancing on the bar, and everyone was throwing money at us, and we started doing a fake striptease.” A sly smile emerges and she shakes her head, like maybe telling me this was a bad idea. “It didn’t get too far, mostly because we were pretending, but a bunch of guys were whistling and cheering us on because we were just having a good time. And I needed that, because sometimes I see too much in my psychology practice and it felt good to let loose.” She sighs and shakes her head again, and the grin turns into red-cheeked embarrassment. “Anyway, a few days later, I got a text from a friend asking me if I’d looked at YouTube lately. As it turned out, someone took a video and posted it online, and it got almost a half million hits.” She straightens and clears her throat. “In case you’re wondering, the video isn’t online anymore. Once David discovered it, he called someone who called someone who threatened somebody else, and the video was pulled.” 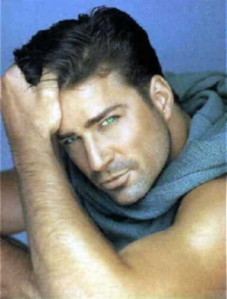 DAVID M. BELLOTTI
I found this picture somewhere, way back when, and immediately knew he was David. The face, the features . . . everything about him was spot-on. And I know what you’re thinking. Total wow, right? Now you know why I’m addicted to him.
Born: June 13
6’2″, 195 lbs.
Occupation: Leads an elite commando team for global military corporation, Professional Recruitment & Operations (PROs)
Favorite color: Whatever Lottie’s wearing
Favorite band: Saving Abel; Nickelback; Staind
Favorite food: Anything Thai
Unique physical attribute: Vivid green eyes; jagged scar that runs up the inside of his left arm
Drives: Ford Expedition in Blue Jeans Metallic
Pet peeve: “Lying. Don’t like doing it. Don’t like having it done to me.”
In his spare time he likes to: Spend the day or night on the beach behind the dunes with Lottie, a blanket and a couple of bottles of wine.
Most embarrassing moment: David gives me one of those disarming grins that fires up his green eyes. “Went out with the guys one night, when Lottie was going to a bachelorette party. Things got rowdy quickly. I don’t remember much, but I remember my best friend, Nat, complaining that he needed a vacation and demanding to go to Bali. So we drove him to the post office, don’t ask me why, and left him there so he could take his trip. Then someone drove me home — only when I got home I couldn’t get my key in the door. I kept trying, but the damned thing wouldn’t budge. Somehow I got inside and all I kept thinking was, I need a bed. Or something. Somewhere between the front door and my bedroom, I stripped and passed out.” David glances away, but the hint of the devil still lurks in his eyes. Then he looks back at me. “Woke up the next day on a pool table with a black lab next to me. Wasn’t my house. It was the Senator’s. And he was not happy to see me there.”

GALEN BRISCOE Born: February 15
5’11”, 175 lbs
Occupation: Sniper for global military corporation, Professional Recruitment & Operations (PROs)
Favorite color: Brown, because it’s earthy
Favorite band: Clairy Brown & The Bangin’ Rackettes; Adele
Favorite food: A loaded cheeseburger
Unique physical attribute: His voice; it soothes you like silk and satin
Drives: Silver Audi convertible
Pet peeve: “For the people who love to text and check email while you’re in a movie theater, please stop that.”
In his spare time he likes to: Hike in the woods and connect with nature where life is untainted, simple and pure.
Most embarrassing moment: “I’d prefer not to share those stories with you.” I try to convince him to change his mind, but he won’t do it. He offers me a carrot instead. “I do, however, have a story that I feel a little guilty about that I know you’ll appreciate. I went out with Bellotti and Nat one night, and some other guys from PROs. Everyone was partying pretty heavy but I stopped early because I’d drawn the short straw to be one of the DDs. Around four in the morning it was obvious that Bellotti wasn’t getting home on his own, and it probably would have served him right that I left him where we were but I couldn’t do it. So I loaded him up in my car and started driving, and then I started thinking about all the grief he’d given me over Lottie since I met him.” He stops, knowing he’s already said too much, but Galen’s feelings for Lottie are no secret. He tamps down on the emotion, puts on his best game face and continues. “I don’t know what got into me, but I decided not to bring him home and so I took him to Carla’s instead. Her father is a Senator and I knew how he’d react to finding Bellotti there, but Bellotti deserved a comeuppance. The funny thing was, Bellotti never realized it wasn’t his house and he kept trying his key over and over to get inside. I knew the key code from when Carla and I used to hook up, and before I could stop him, Bellotti took off, stripped and laid down on the pool table. The last thing I heard was something that sounded like ‘Need a new bed. This one’s too hard.'” I ask Galen if David ever found out that he was behind the escapade. “No. He got sidetracked with some video of Lottie on YouTube right after that night and forgot about it.”

NAT HUTCHINS
Born: March 29
5’11”, 225 lbs.
Occupation: Tech wizard for global military corporation, Professional Recruitment & Operations (PROs)
Favorite color: Red
Favorite band: Led Zeppelin; AC/DC
Favorite food: “Steak, so rare it’s still mooing, man.”
Unique physical attribute: Built like a professional wrestler and a teddy bear at heart
Drives: Tricked out Cherry Red Mustang
Pet peeve: “Keep your paws off my car!”
In his spare time he likes to: Watch Finding Nemo with his wife, Lori, and their three sons
Most embarrassing moment: Nat laughs out loud. “Oh man, you had to be there.” He sits upright, like he can’t wait to tell this story. “Went out with the guys to blow off steam. I mean, we were totally fired up. Had the DDs, you know, and hired cabs to get guys home, but holy crap. It was freaking wild. This was one of those nights you talk about for years and never tell your kids.” He pauses. “If you can remember it. Anyway, we were yakking it up about vacations, coz David and Lottie vacation everywhere, and I got annoyed because I wanted to go away, too. I mean, I love my kids, but I’m busting for some one on one with my wife somewhere far away. Then some brat in the group, might have been David, was saying how much he loved Bali and I started chomping for Bali, too. The next thing I know, I’m waking up with a crowd of people looking down at me coz I was lying on the sidewalk next to the post office. The freaking post office! With postage plastered. All. Over. My. Ass.”

I write about secrets, suspense, and soulmates.
View all posts by terriponce →
This entry was posted in Stories Behind The Stories and tagged character interviews, David Bellotti, In This LIfe, Lottie Morgan, sneak peek, Terri Herman, Terri Herman-Ponce, Terri Ponce. Bookmark the permalink.

8 Responses to Main Cast of Characters