Posted on September 7, 2014 by terriponce

I have to admit some frustration I’ve been feeling
over a new show that hooked me but that,
when all was said and done,
made me go “WTF?“

And yet I remain hopeful. 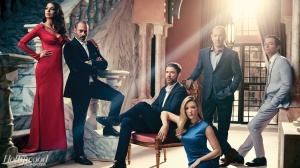 I gotta come clean up front. When I first saw the premise for Tyrant, FX’s latest foray into summer TV, I was all “Yes! Let’s get this on!” It’s the story of Bassam “Barry” Al-Fayeed, the youngest son of an infamous Middle-Eastern tyrant. See, Barry and his family travel from California to his (fictional) country in the Middle East for his nephew’s royal wedding, where he must confront his dictator father and a boatload of issues he left behind two decades ago.

But once Barry sets foot onto homeland soil, he comes face to face with a past he’s been trying to bury, a father who dies while a growing revolution takes form, and his unstable older brother Jamal who is now set to take over the country.

Tyrant had the premise right. Politics. Intrigue. Good versus bad. Good showing a bad side, and bad showing a good side. A teasingly solid plotline. The uncertainty of who, exactly, is the tyrant. The pieces were all there, damn it, and I got Hooked, with a capital ‘H’, from the very first episode.

I was drooling for more, more, more because it was all set up with characters and plot that could have pulled off a major explosion — if only there were more well-placed dynamite in the writing.

Ah yes. The writing. And that’s what’s been bothering me about Tyrant.

For all my gobsmacking (is that a word?), there were parts about Tyrant that just fell off the map. Teases into something bigger, darker, and really really amazing. Oh, the potential was there. The problem, for me, was that there were a number of moments where I watched the show and thought, “What the f$%@ are you doing?” I mean, it became a little too caricatured. A little too predictable. A little too unbelievable for me to suspend disbelief.

And yet I stuck with it. 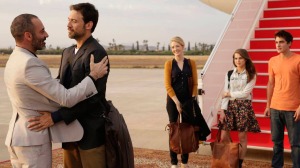 Why? Because, as a writer, I could see the potential. Despite the show’s shortcomings, I knew that if the writers made these characters sit on the proverbial bowl and take the proverbial sh*t, this show would explode. The bones were there. Writing that took these characters to their turning points. Forced them into making decisions with personal and public consequences. Made them face their darker sides.

Barry. Oh my God. Barry. You can see the tyrant in him, brewing just beneath the surface despite all his good guy attitude. And Jamal. Jamal steals the show with his psychopathic tendencies and yet, beneath the craziness inside him, there’s a warm human being who just wants to be loved. And then there’s Leila. Holy freaking cow. This woman, who once had a relationship with Barry and who went on to marry his brother, is all kinds of manipulator. A true President’s wife who says and does all the right things in public, but who you need to watch out for in private. This woman is dangerous.

So, yeah. The pieces are all there, simmering, brewing, waiting to be tapped into.

Which is why I sit in hope that Tyrant will be renewed for a second season, where it can finally come into its own and once again turn series television on its heels. Because, you know, if the writers and producers play their cards right, they could make Barry Al-Fayeed into the new Walter White. Yeah. They’re that close.

And holy crap. How freaking amazing would that be.

I write about secrets, suspense, and soulmates.
View all posts by terriponce →
This entry was posted in Stories Behind The Stories and tagged Barry Al-Fayeed, FX Networks, Jamal Al-Fayeed, Leila Al-Fayeed, Tyrant, Walter White. Bookmark the permalink.