Secrets of Ancient Egypt: The Mystery of Ankhesenamun

Ancient Egypt is filled with mystery and intrigue. Though the ancient Egyptians were a peaceful people, they were not immune to brutal wars with their enemies, political intrigue, familial betrayal and conspiracies, and even murder.

King Tutankhamun, one of the most famous Pharaohs known to modern man (thanks to Howard Carter), is often viewed as an embodiment of who the ancient Egyptians and royals were. Of course, you could argue that our knowledge of the ancient Egyptians is limited because we’ve unearthed only so much, but when you ask someone about those people and that time, Tutankhamun’s name is usually among the first uttered. And like much of ancient Egypt, there are many mysteries we will never solve. Tutankhamen’s life is among them.

But his half-sister, Ankhesenamun, is an even bigger mystery. 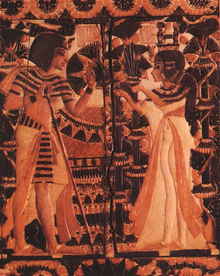 Tutankhamun receives flowers from Ankhesenamun as a sign of love.
copyright Wikipedia

As a primer, marriage between brothers and sisters was very common among ancient Egyptian royalty, and because pharaohs believed they were descended from gods, incest was viewed as acceptable to preserve bloodlines and ensure a smooth succession to the throne. If a pharaoh and sister produced a male heir, the legitimacy of that heir as next in line to the throne would never be questioned.

Despite royal pedigree, it seems the lives of Tutankhamun (Living Image of Amun) and Ankhesenamun (Her Life is of Amun) were doomed to tragedy from birth. Tutankhamun suffered from a cleft palate, a mild case of scoliosis, a club foot, and multiple attacks of malaria. And it is believed that Ankhesenamun was first married to her own father and birthed a child at the age of twelve. Their lives were well-documented on reliefs and paintings of their parents, Pharaoh Akhenaten and Great Royal Wife Nefertiti, who were considered the Heretic King and Queen because they abandoned traditional Egyptian polytheism in favor of a monotheistic religion that centered only around Aten. For the Ancient Egyptians and priests of Amun, this was blasphemy.

But, as we all know, sometimes truth is dicier than fiction.

Ankhesenamun was born during this unprecedented religious revolution, and was raised right in the middle of the very fierce resistance Amun priesthood pitted against Akhenaten and Nefertiti. It was a time of internal turmoil and strife, during which Akhenaten focused primarily on building for Aten rather than keeping watch on Egypt’s enemies. From there, the stage for intrigue was set.

Fast forward to Akhenaten’s death, and a new pharaoh emerged. At the ripe age of nine (give or take), Tutankhamun took the throne and married his thirteen-year old half-sister Ankhesenamun. During their reign and under the guidance of two very powerful advisors, General Horemheb and Vizier Ay, Aten worship was put to an end and the god Amun was restored to his original supremacy. But Egypt had grown economically weak during Akhenaten’s reign, and diplomatic relations were in turmoil because of neglect. Which meant Tutankhamun had his work cut out for him, and Ankhesenamun was beholden to produce an heir for him to ensure nothing else could undermine their family’s lineage and seat on the throne.

If only it were that simple.

With Horemheb and Ay at his side, Tutankhamun worked hard to restore relations with the Mitanni, but despite his best efforts Egypt continued to battle with the Nubians and Asiatics. And though Ankhesenamun twice became pregnant with girls, each pregnancy ended in stillbirth.

Statue of Tutankhamun and Ankhesenamun at Luxor, hacked at during the damnatio memoriae campaign against the Amarna line of Thutmoside pharaohs.
copyright Wikipedia

When Tutankhamun died at 19, most likely the result of a leg fracture that became infected, his burial and entombment were rushed. No one knows why. Scans made in recent years showed that all but one of his broken bones had occurred after his death. Records also show that the body had been burnt inside the coffin, the result of embalming oils combining with oxygen and linen to cause an unexpected chemical reaction.

The mystery of his rushed entombment makes for a fascinating mystery, but what happened to Ankhesenamun afterward leads to even more intrigue.

With her husband and two daughters dead, Ankhesenamun knew that their lineage had come to an end. Knowing she would have to continue in her official capacity as queen, she had to find a successor. So she wrote to the Hittite king, asking to marry one of his sons. Though the letters don’t say why Tutankhamun died, the fact that she reached out to a foreigner–and remember, Egyptians believed foreigners were inferior–is particularly telling. So are her words in what she wrote to the king:

“My husband has died and I have no son. They say about you that you have many sons. You might give me one of your sons to become my husband. I would not wish to take one of my subjects as a husband…I am afraid.” 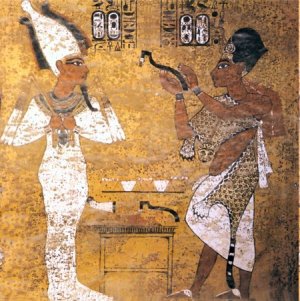 Ay performing the opening of the mouth ceremony for Tutankhamun, scene from Tutankhamun’s tomb.
Copyright Wikipedia

The Hittite king, naturally, was leery of the request and sent an envoy to investigate. Eventually, deciding he may have missed an opportunity, the king did send one of his sons to Ankhesenamun for marriage.

But that son never made it to Egypt. And his body was not found.

Under increasing pressure from Vizier Ay to marry him and legitimize his claim to the throne, Ankhesenamun married Ay as a young widow. But beneath their union lurked an unanswered question: did Ay have a hand in Tutankhamun’s death?

An inscribed ring and gold foil fragments found in the Valley of the Kings show Ankhesenamun together with Ay, but it’s still unclear what actually happened between the two. Her name never appeared Ay’s tomb, and it is believed she may have died during or shortly after Ay’s reign.

And that’s where Ankhesenamun disappears from history. No one knows where she is buried, and no known funerary objects with her name seem to exist. It is as if her life, both as it was lived and should have been written, were removed forever. Did Ay have a hand in this as well?

Perhaps, like Tutankhamun, Ankhesenamun’s tomb is still waiting to be found in a thrilling discovery that will provide the truth. Until then, the mystery of Ankhesenamun remains.

I write about secrets, suspense, and soulmates.
View all posts by terriponce →
This entry was posted in Stories Behind The Stories and tagged ancient Egypt, ancient Egyptians, Ancient Mysteries, Ankhesenamun, archaeology, artifacts, Great Pyramid, Tutankhamun, Vizier Ay. Bookmark the permalink.

10 Responses to Secrets of Ancient Egypt: The Mystery of Ankhesenamun